This game was made over the course of 48 hours as part of the 2019 GMTK GameJam following the theme of "Only One".

-In BloodGun, you have ONE resource used by all of your actions: your own BLOOD.

-Walking, running, jumping, and even shooting your special "Blood Gun" all drain your blood by varying amounts.

-You will also slowly lose blood while standing still, so carefully ration your blood to move around, kill enemies, and collect their blood.

-When you kill an enemy, their blood will spill into a puddle that you can absorb to refill your own blood.

-You will quickly absorb your enemy's blood by simply walking over it.

-Absorbing enough of a certain enemy type's blood will mutate your Blood Gun, enhancing certain aspects while reducing others.

All assets, textures, scripts, and most of the sound effects were created from scratch for this game jam. The music is royalty free. Our team of six consisted of three programmers, two artists/modelers, and one sound designer. The game requires further testing and balancing, we didn't ration our time well enough to truly balance everything.

There were build errors in the build itself that were not present in the Unity Editor, which we did not catch until it was too late. We were able to fix some things however we could not get the player shooting to actually work properly. If we figure out how to fix it in the next few days we will re-upload just so people can check it out and give us some meaningful feedback on the gameplay and concept. 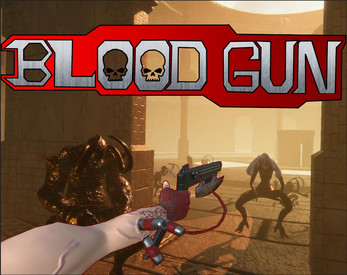